In the Massachusetts March 1, 2016 primary Democratic Party race,  the computerized vote count declared candidate Clinton the winner but the exit polls indicated candidate Sanders to be the winner by a margin of 6.6%.  These same exit polls accurately predicted the results of each and all of the Republican candidates.  Until the US joins a long list of many other countries that protect the integrity of their elections through publicly observed hand counting of paper ballots, our elections are liable to be suspect.

Exit polling has been performed in the US and other countries for decades and the science and proper methodology is well established to obtain an accurate prediction of the final vote.  For years, many researchers have pointed to the discrepancies between exit poll results and the unverified computer counts in US elections.  The main response by the defenders of computerized voting, while expressing blind faith in the unverified computer counting, has been to claim that the exit polls may go wrong because respondents, more enthusiastic for a particular candidate, would be more likely to agree to be polled.  The recent Massachusetts Super Tuesday primaries did not support this theory. 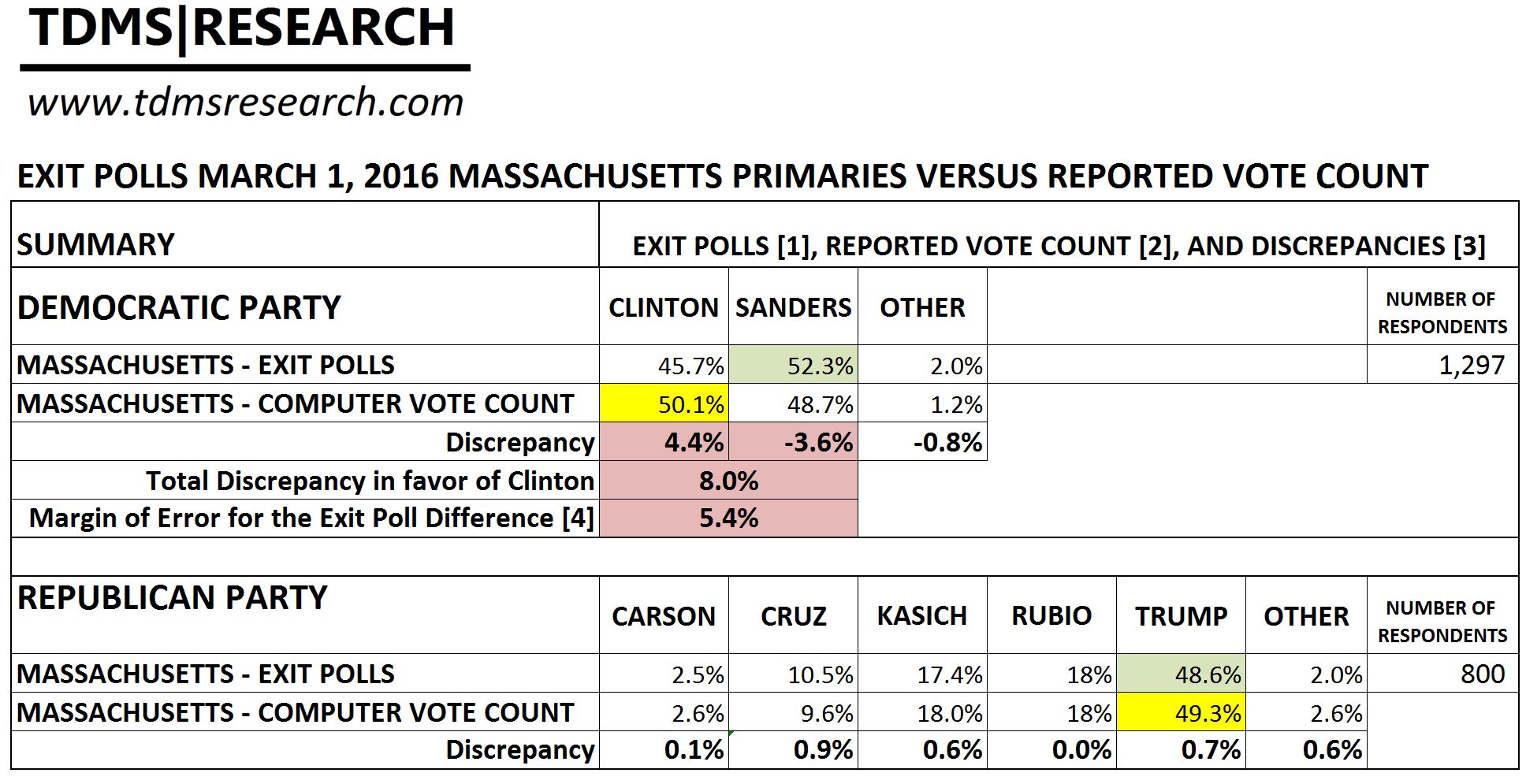 The Republican Party primary race has been widely acknowledged as more polarized and contentious than the Democratic Party primary race.  In the current election cycle, many Republican Party voters demonstrate enthusiasm for candidate Trump as many Democratic Party voters demonstrate enthusiasm for candidate Sanders.  Yet, the exit poll results for the Republican Party closely matched the final computer vote count for every candidate.  This accuracy was obtained with about 500 fewer respondents than for the Democratic Party.  The higher number of respondents in the Democratic race should lead to a smaller margin of error. The same exit poll for the Democratic race, however, conducted at the same time and the same places, differed widely from the final computer count and the margin of error for the exit poll. This difference turned a Sanders’ victory into a defeat.

In US elections, very few precincts conduct verified hand counts of paper ballots.  Almost all ballots are counted by computer software hidden from human eyes.  In this Massachusetts primary, according to the 68 out of 351 towns that hand counted their ballots, Sanders won overwhelmingly by 17.9% over Clinton (calculated from article’s spreadsheet).  Although the demographics of these small, mostly rural areas, may have affected these results, the large discrepancy between the hand counted ballots and the unverified computer count certainly raises, in addition to the exit poll discrepancy, further concern and questions.*

A few years ago, MIT Technology Review published the article How to Hack an Election in One Minute reporting on Princeton University’s research project Security Analysis of the Diebold AccuVote-TS Voting Machine  finding how easy it was to hack into a computer voting system to change the results of an election while remaining totally undetectable.  The Brennan Center for Justice at NYU School of Law in their report The Machinery of Democracy: Protecting Elections in an Electronic World found “more than 120 potential threats to [computerized] voting systems.”

Due to such concerns, to insure the integrity of public elections, Germany reverted to publicly observed hand counting of paper ballots for all their elections.  In 2009 the Federal Constitutional Court of Germany determined that while vote fraud with hand-counted ballots would be easy to detect, “programming errors in the software or deliberate electoral fraud committed by manipulating the software of electronic voting machines can be recognized only with difficulty. The very wide-reaching effect of possible errors of the voting machines or of deliberate electoral fraud make special precautions necessary in order to safeguard the principle of the public nature of elections.”

No amount of testing and certifying procedures for the machine counting of votes or the availability of paper trails, post-election audits, or recounts could satisfy Germany’s constitutional requirement that all important aspects of the electoral process be publicly observable and that “[t]he voters themselves must be able to understand without detailed knowledge of computer technology whether their votes cast are recorded in an unadulterated manner.”

According to Klaus Pötzsch of the electoral committee responsible for the organization and running of any federal or EU election in Germany, after the decision by the Country’s highest court, every ballot is now hand-counted in public and read aloud. Germany is not alone among technologically advanced nations that reject computerized counting in their elections.  Countries such as Canada, France, Ireland, Italy, Denmark, Finland and 53 other countries  protect the integrity of their elections with hand-counted paper ballots.

As the Massachusetts primaries indicate, the integrity of our elections will be always questionable and suspect until we join the many other countries that safeguard their elections with publicly observed hand counting of paper ballots.

*As demographics alone may not explain the large discrepancy between the hand counted precincts and the computerized count of the rest of the state, the weighting factors applied to the Democratic Party exit poll may also be incorrect and even the exit poll underestimated Sanders’ win.  The raw exit poll data, prior to their alteration with weighting factors, should be made available for forensic analysis (see e.g., paper published by the Shorenstein Center, Harvard Kennedy Center, p.19.  Exit Polls: Better or Worse Since the 2000 Election?).  The accuracy of the Republican Party exit polls suggests that the correct weighting factors were applied to the Republican electorate.

Hello! Do you use Twitter? I’d like to follow you if that would be ok.
I’m definitely enjoying your blog and look forward to new posts.

I’m not that much of a internet reader to
be honest but your bllgs really nice, keep iit up!
I’ll go ahead and bookmark your site to come back later on. Cheers

This post talks about concerns with electronic voting machines but Massachusetts does not use these machines – Massachusetts has paper ballots that are counted by optical scanning. The post notes but should have further explored geographic differences in the state – Clinton’s greater strength in communities of color and urban areas vs. Sanders’ greater appeal to rural areas.

One of the main points of this article is to point out that the unverified computer counts matched the exit polls for the Republican Party races but not for the Democratic Party race.

[…] The explanatory notes for this table and associated article can be seen at: https://tdmsresearch.com/2016/06/14/the-suspect-massachusetts-2016-primary/ […]

[…] by the exit poll conducted by Edison Research and published by CNN at poll’s closing. As in the 2016 Massachusetts primary between candidates Sanders and Clinton, disparities greatly exceed the exit poll’s margin of […]

Stolen Election in Massachusetts: Mismatch Between Exit Polls and Reported Vote Count | The Most Revolutionary Act

[…] by the exit poll conducted by Edison Research and published by CNN at poll’s closing. As in the 2016 Massachusetts primary between candidates Sanders and Clinton, disparities greatly exceed the exit poll’s margin of […]

[…] exit poll conducted by Edison Research and published by CNN at poll’s closing. As in the 2016 MA primary between candidates Sanders and Clinton, disparities greatly exceed the exit poll’s […]