Democratic Party 2016 primaries. This table, Democratic Party Table 2, shows the discrepancies between exit poll results and the unverified computer vote counts. The margin of error applied represents the total survey error (TSE) calculated for the 2016 primaries. Discrepancies that exceed the total survey error of the exit polls are shown in the last column. Compared to Table 1, applying TSE instead of the standard MOE results in decreasing the discrepancies by which the states exceed error calculations. Additionally, the discrepancy in Indiana, exceeding the MOE in Table 1, does not, in this table, exceed the TSE applied.

The approach taken in the following tables takes into account all the possible sources of error inherent in exit polls.  It does this by comparing 106 exit poll results for the main candidates in the Republican Party primaries (Carson, Bush, Kasich, Rubio, Cruz, and Trump) with their actual vote totals. In this way the actual total survey error (TSE) can be measured.  With the exception of the primaries in two states, West Virginia and Texas, with very large discrepancies (18% and 10.6% respectively) going against Trump, the exit polls for Republican Party primaries have been fairly accurate. 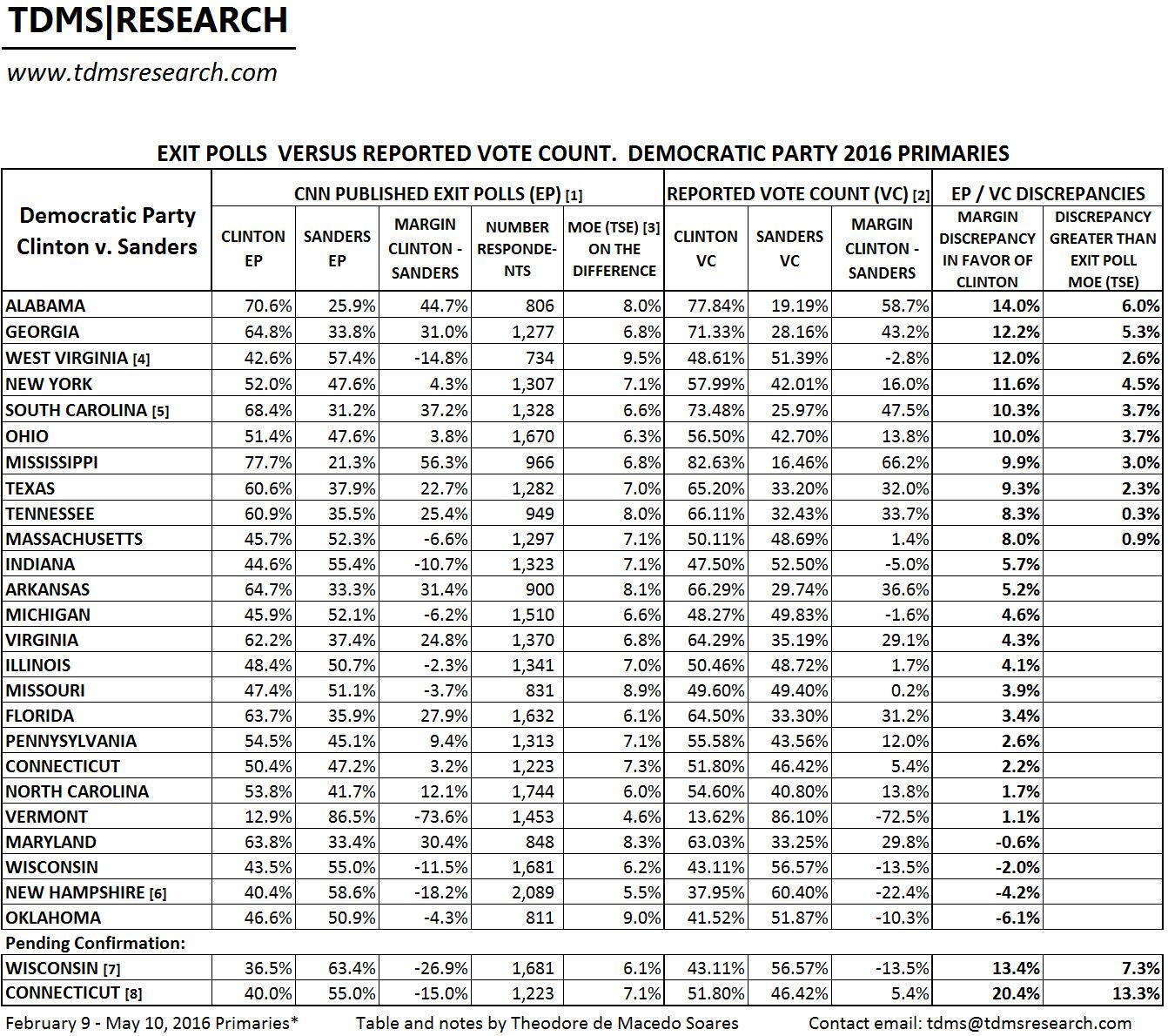 [3] The margin of error calculated in this column represents the total survey error (TSE) derived by comparing 106 exit poll results for the various candidates in the 2016 Republican Party primaries to their vote count. As the completed exit polls are compared to the vote totals the TSE measures all errors associated with an exit poll–sampling, coverage, nonresponse, measurement, and post-survey errors–and not just the sampling error associated with the standard margin of error.  Calculations by TdMS.  The found TSE results in increasing the standard margin of error (MOE) by 32%. MOE calculated according to Franklin, C. The ‘Margin of Error’ for Differences in Polls. University of Wisconsin, Madison, Wisconsin. October 2002, revised February 2007. Available at: https://abcnews.go.com/images/PollingUnit/MOEFranklin.pdf.  A 30% increase in the MOE for an exit poll has also been suggested by Merkle, D.M. and M. Edelman. 2000.  A review of the 1996 voter news service exit polls from a total survey error perspective. In (P.J. Lavrakas and M. Traugott, eds.). Election polls, the news media, and democracy. Chatham House, New York.

July 13, 2016. Updated to included introductory section to this table and to the methods applied in error calculations.

July 1, 2016. Corrected the number of states with Democratic and Republican party primaries on different days for which exit polls were conducted, from three states to one (South Carolina).

Maybe this is already being done or already considered and dismissed as not feasible but and I am simply unaware of it so forgive me if this is a stupid question or if you’ve already answered it 500 times or whatever the case may be, but I still have to ask… couldn’t Edison Research be sued for a court ordered release of the initial exit poll data in all the states that they did conduct such a poll?

Susannah, the short answer is yes. Probably only a court order would be able to force the release of their raw exit poll data with an accounting of all the adjustments that were made to the data.
Attention to important details; however, is necessary. A suit asking for the release of their data must also take into consideration that the National Election Pool (NEP); consisting of ABC, CBS, FOX, NBC, and the Associated Press contracted Edison to perform the exit polls. NEP may, consequently, own the data or they may have shared ownership of the data. Probably need to sue both entities.
Suing in a state court perhaps may only lead to the release (if the suit is successful) of exit poll data pertaining to that state. Suing in federal court may lead to access to the data pertaining to all states. The attorneys seeking the data on behalf of the plaintiffs must do their homework to have a chance of success.

[…] Voters, Uncounted Votes and the National Poll LINKS TO  POSTS Democratic Primaries spread sheet From TDMS Research: Democratic 2016 primaries In California there is just ONE county which uses an Open Source Voting System. Could that be why […]

Hi, do you have copies of CNN’s unadjusted exit polls that I can download? I was looking to analyze them, but I wanted breakdowns by age.

I wwas very pleased to find this website. I wanted to thank you for your time due to ths wonderful read!!
I definitely appreciated every bitt of it andd I have you book maried to see new information in your blog.

Hello everyone, it’s my first go to see at this web page,
and piece off writing is in fact fruitful in favor of me, keeep up posting these
types of articles.

Thanks. New posts next week.

Thanks for this post, I am a big big fan of this internet site would like too go along
updated.

I am impressed with this internet site, very
I am a big fan.

Thanks for your efforts Theodore. Can you please explain you chart, specifically this data point:

So did CNN change the data at some point, or can you show exactly how you achieved 70.6%? If everyone is using Edison’s data, why the big difference? If it is altered somehow, how could it go down to 70.6% when both men and women are at 73% at the very least?

When you say “Published on CNN” well I just checked a few states and they are not equal to your chart EP that comes from CNN. I would expect the few people like me who go look for the numbers themselves would like to see an explanation for the 70.6% et. al.

As Edison Research, the polling firm that conducts exit polls for the major networks, assumes the computer vote count is correct, they alter their exit polls to conform to the unverified computer vote totals.

Thanks for the reply. It makes no sense to me why Edison would change anything after a poll closed. Just to make themselves look better? I understand the purpose of the exit poll is just to give the media outlets an idea of what is going on, but afterwards, why change anything unless there are errors? Really weird.

I need to to many thanks for this fantastic read!!

I definitely enjoyed every little it. I have got got you book marked to check out new stuff you post

I simply could not go away your site prior to suggesting that I extremely loved the usual information a person provide for your visitors?
Is going to be back incessantly to inspect new posts

This article offers clear idea in support of the newest
people of blogging, that really the way to do blogging.

Aug.24: Jill Stein at 3% and Independents just 12% of the electorate? | Richard Charnin's Blog

Would you please explain the significance, in layman’s terms, of the last column in the third chart? You only have it calculated out in 12 states, but it looks to be a significant amount in many more states. Take Pennsylvania, for instance. 7.1-2.6%. Thanks!

SMOKING GUN! APPROXIMATELY 15% OF BERNIE’S VOTES WERE FLIPPED TO CLINTON IN CALIFORNIA |

[…] primary is large and beyond the margin of error associated with the exit poll.  Like the 2016 Democratic Party primaries, with candidates Clinton and Sanders, all but one of these large discrepancies favors candidate […]