Republican Party 2016 primaries. This table, Republican Party Table 2, shows the discrepancies between exit poll results and the unverified computer vote counts applying total survey error (TSE) calculations. Discrepancies that exceed the total survey error of the exit polls are shown in the last column. Compared to Table 1, applying TSE instead of the standard MOE results in decreasing the discrepancies by which the states exceed error calculations. Additionally, the discrepancy in Ohio, exceeding the MOE in Table 1, does not, in this table, exceed the TSE applied.

The approach taken in the following tables takes into account all the possible sources of error inherent in exit polls.  It does this by comparing 106 exit poll results for the main candidates in the Republican Party primaries (Carson, Bush, Kasich, Rubio, Cruz, and Trump) with their actual vote totals. In this way the actual total survey error (TSE) can be measured.  With the exception of the primaries in two states, West Virginia and Texas, with very large discrepancies (18% and 10.6% respectively) disfavoring Trump, the exit polls for Republican Party primaries have been fairly accurate. 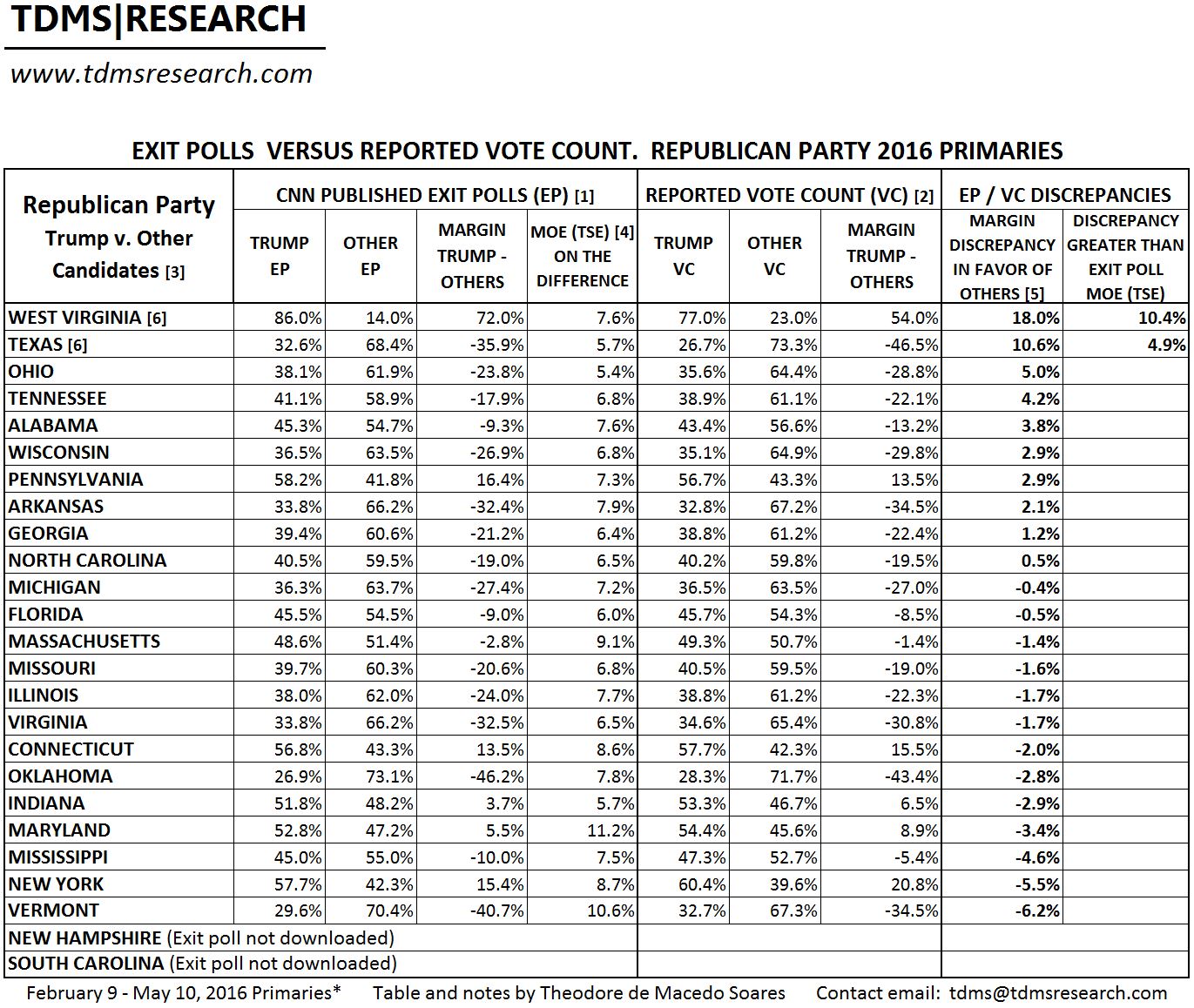 [4] The margin of error calculated in this column represents the total survey error (TSE) derived by comparing 106 exit poll results for the various candidates in the 2016 Republican Party primaries to their vote count. As the completed exit polls are compared to the vote totals the TSE measures all errors associated with an exit poll–sampling, coverage, nonresponse, measurement, and post-survey errors–and not just the sampling error associated with the standard margin of error.  Calculations by TdMS.  The found TSE results in increasing the standard margin of error (MOE) by 32%. MOE calculated according to Franklin, C. The ‘Margin of Error’ for Differences in Polls. University of Wisconsin, Madison, Wisconsin. October 2002, revised February 2007. Available at: https://abcnews.go.com/images/PollingUnit/MOEFranklin.pdf ).

[5] In contrast to the Democratic Party primaries results, where 22 of 25 EP/VC discrepancies favored Clinton the discrepancies in the Republican Party primaries were more balanced–for and against Trump–which is the expected result of an impartial vote count and random errors in the exit poll.

July 13, 2016: Revised to include an introduction to the methods applied in calculation survey errors.

July 24, 2016: Table simplified by the removal of the column showing number of exit poll respondents for each state

[…] of the primaries in two states, West Virginia and Texas, with very large discrepancies   (18% and 10.6%  respectively) going against Trump, the exit polls for Republican Party primaries have been fairly […]

[…] the 2016 Republican Party primaries, however, the computerized vote counts matched the exit polls within the margin of error for all […]