Presentation of exit poll results are often criticized because the standard MOE formula does not address all the other possible errors common to all surveys. The accompanying table, Democratic Party Table 2, addresses this criticism by taking into account the total survey error (TSE) calculated by comparing 106 exit poll results for the main candidates in the Republican Party primaries with the official vote counts. 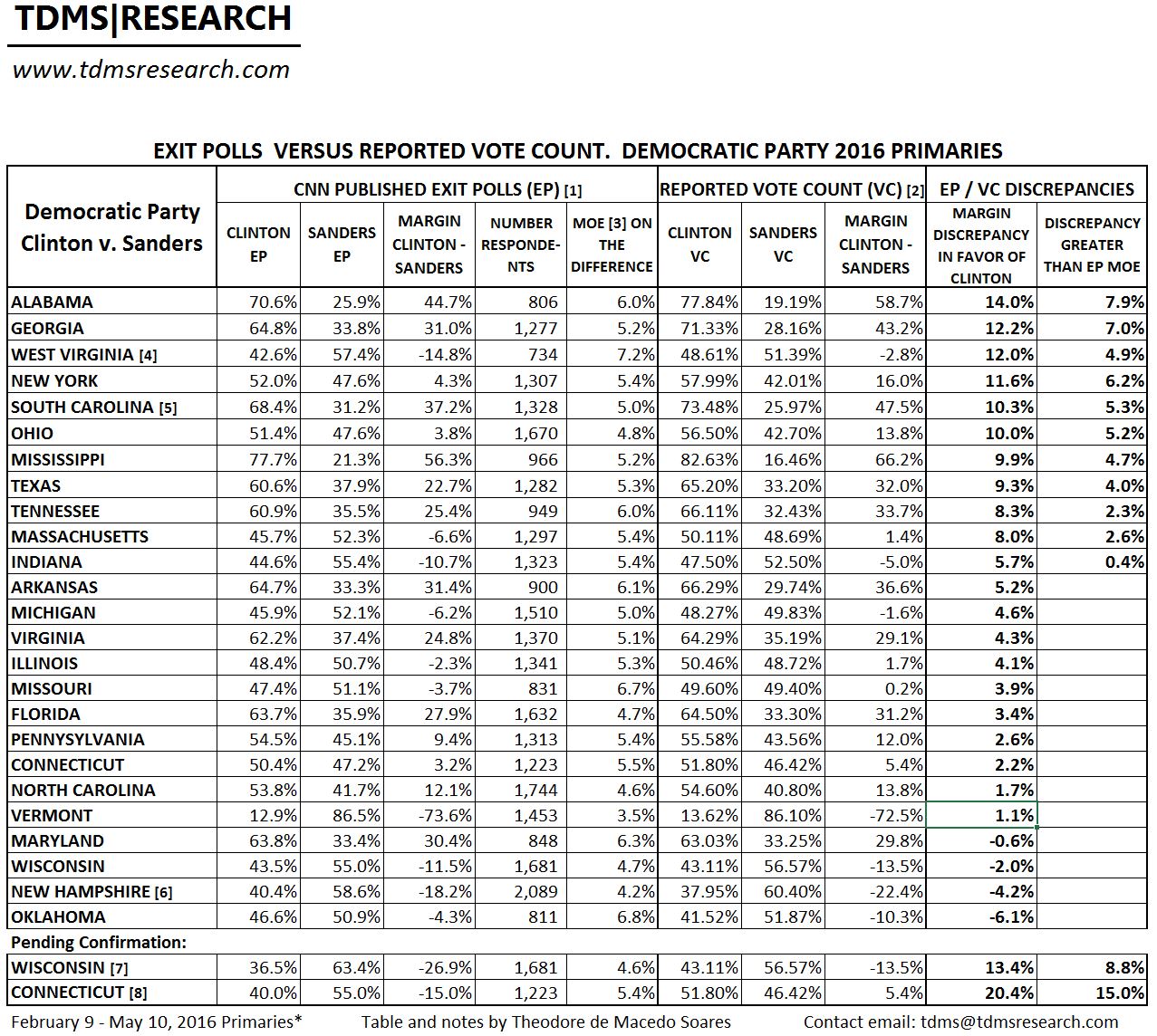 [3] Margin of Error (MOE) is for the differences between the two candidates (at 95% confidence interval). This MOE is about double the usual MOE for each candidate. MOE calculated according to:  Franklin, C. The ‘Margin of Error’ for Differences in Polls. University of Wisconsin, Madison, Wisconsin. October 2002, revised February 2007. Available at: https://abcnews.go.com/images/PollingUnit/MOEFranklin.pdf

Then it looks like New York, Massachusetts, and Connecticut may instead have gone to Sanders,. The rest of the results would have stayed where they are. Is that what we are looking at?

I’m wondering if there is any other source to corroborate Edison Research data in at least one of these 3 states.

The margin of error (MOE) applied only only determine how many states and by how much the discrepancies exceed the Exit polls’ MOE. The table in https://tdmsresearch.com/2016/06/20/democratic-party-table-2016-primaries/ includes a MOE increased by 32% which accounts for all the possible survey errors in the exit polls.

Massachusetts, Illinois, and Missouri are the states that the exit polls projected a win for Sanders (see EP margin column with the negative sign that is relative to Clinton, and the plus sign in the vote count margin showing Clinton advantage)

The delegate totals are also impacted by the discrepancies. In my next post next week I will show that even the exit polls underestimated Sanders’ electoral strength and that he may have won considerably more states.

The main problem with the unverified computer vote counts is that no corroboration for the results can be found. This is a main reason Germany ditched their computers for vote counting and perform all counts in full view by hand and in public

Donald Trump Warned Of A ‘Rigged’ Election, Was He Right?

[…] throughout nearly all of the Republican primaries, they were wildly and broadly inaccurate in the Democratic primaries, exhibiting a pervasive intra-party shift to the detriment of Sanders (i.e., Hillary Clinton’s […]

[…] data it is impossible to know if presidential candidate Sanders, for example, like in many of the 2016 state primaries did much better in this NH primary exit poll than his computer-generated vote […]